Welcome fellow Recovering Traditionalist to episode 30 where we are going to get inspiration from Jessica Boyer, a 4th grade math specialist.

Christina T.: Now, before we get into today’s episode, these next few weeks, I’m going to be focusing on having you hear from real teachers out there who have made big changes in how they teach mathematics. All of these teachers have made a choice to put their students at the heart of the learning instead of the textbook.

One of the big things that has helped them do that is learning more about how students develop their mathematical understandings. Now, they all talk about my Number Sense courses as part of their learning that they’ve had. Those courses will be opening soon, but before that, I’ve got a free webinar that I’d love for you to join me for.

Now, Jessica mentions in this interview that her school has no curriculum for her to use. Now, I’m not a big fan of relying solely on a textbook, and I’m a big advocate of teaching without a textbook, but Jessica mentions how the extreme end of the spectrum can also be difficult when you don’t have a textbook to follow, you aren’t sure where to go. That’s why I am such a big advocate for learning the learning progressions that kids go through when they develop their understanding of mathematics.

In this episode. She talks about her journey of doing that. So, here is my interview with Jessica. Well, I am really excited for you guys to hear from Jessica Boyer today. Jessica, thanks so much for joining me.

Jessica Boyer: Sure. Thanks for having me.

Christina T.: Absolutely. Now, I like to start off with having you guys talk about your journey in education. So, what have you done in education and then end with where you are now.

Jessica Boyer: Okay. So, I currently teach cyber school. I have been in this role for the … This is my seventh year. I have taught as a building sub, I’ve kind of been all over the place. I will say that early childhood is my wheelhouse.  I have been in the fourth grade teaching gen ed and then around … I think it was my third year, I got my master’s in math. So, that was my big focus. It was kind of a big shock, because reading was always my strong suit growing up.

And then I became a math specialist. So in our cyber school setting, I’ve been a math specialist for the last five years and I discovered Build Math Minds three years ago. I have worked at the last … So, for three years, I was a 1st Grade co-teacher in a gen ed classroom with my big focus was on math. And then now, I’m back in the 4th Grade as a math specialist. So, I see small groups of students throughout the day who need some extra math support.

Jessica Boyer: Well, I got my master’s in math, again, before I discovered this whole new world of thinking. And it was actually really funny because in our school, we have a differentiated project. So, instead of being observed every year, we can kind of do our own thing.

One of the other teachers at our school recommended Build Math Minds. I kind of went from there. You talked about subitizing and then I happen to pull out my grad book, which now I’ve totally blanked on his name. It’s one of the math …

Jessica Boyer: Yes. Thank you. He had one little tiny paragraph in my whole book about subitizing and I was like, “Whoa, what is this?” And honestly from there, my brain was like, “I have to learn how to target these young kids and help them develop their Number Sense.”

So, it was just crazy how I have all these materials from grad school and there was one paragraph in one single book that connected to this whole new world.

Christina T.: And the teaching of littles is so different. We take it for granted that the mathematics at those grade levels is often seen as kind of the easy math. So, how hard could it really be to teach that to kids, right?

Christina T.: So, there’s not a whole lot of focus on that. Yeah. So, the mathematics that we usually are learning about is kind of more advanced mathematics. But man, it is difficult to teach the littles the things that we think should be so easy.

Christina T.: So, what was the teaching of mathematics like for you before you started to change how you were teaching math?

Jessica Boyer: I was doing very high level overview. We don’t have teaching guides in our cyber school. Our students have online resources, but we were kind of left up to our own devices, go to Pinterest, go to this, go to that to meet the standards. That didn’t really help me.

And we also had groups of 30 or more students. My first two years, we had a very high number of students in our classrooms. So, when I came down to second and first grade, I not only had to reteach myself a lot of the concepts, but again, they were very high level. If a kid told me they didn’t understand the material, I said it louder.

Christina T.: I’ve been there.

Jessica Boyer: I’m repeating myself. So, I had to learn how to step back and understand the process that they were going through.

Christina T.: So, how has that changed now? What do you do differently?

Jessica Boyer: I feel like I have a better understanding of the background knowledge of the things that they need to know in order to get to a certain place. I studied the four early numeracy concepts like crazy just to understand. And a lot of my students did not have experiences that you might expect a well-to-do kid to have.

My daughter knew how to subitize at three, but that’s because we gave her those experiences. Some of my students in the classroom, their parents are working all the time, or their view on education is just a little bit different.

So, kind of learning some of those skills that they needed to have before coming into school was important for me to then be able to backtrack and say, “Okay, I know in first grade these kids do not have the skill, so I need to backtrack to help build them up.” Instead of just jumping in and saying, “Okay, four plus three,” but the kid doesn’t even know what the number four is.

Christina T.: Right. Yup. So, do you have resources to help you with that now? You kind of have been left to do your own stuff.

Jessica Boyer: Yeah. After I took Number Sense 101, the resources were so valuable to me. I was able to print things, or not print things, because I’m in a virtual setting, but I was able to turn those into PowerPoints to play games with students and see those games as being valuable.

To have number talks with them and help them to understand just by talking to me that they’re building their own Number Sense. I definitely have a nice resource folder, if you will, of things that I can do to help them and meet them where they are.

Christina T.: Yeah, there’s so many curriculums. I mean even though you said that the students have resources for them, but whether it’s virtual resources or the print resources, so many of them do not include stuff around Number Sense. It’s just kind of assumed that kids have it and we jumped straight into, “Okay, let’s start doing these strategies.” And they don’t have the Numbers Sense to really do it.

Jessica Boyer: Yeah, for sure. And I think to be able to talk about it too. Their learning coaches or their parents may not know the right questions to ask. So, if they’re working with them at home, again, they were kind of stuck. But if I could provide learning coaches with some of those questioning techniques or some of the games and activities, I could send them with kind of with the rules or the explanations, then they can practice at home as well.

Christina T.: I love it. So, one of the things I like to end on here is as people are trying to change their teaching, it’s often hard to know where to start. There’s so many things coming at us. It’s like you said, even if you look on Pinterest and Instagram and everywhere, we are bombarded with information and ideas. And sometimes it’s just hard to know what to start with. We get paralyzed because there’s so many choices that we could do. So, if someone was wanting to get started in changing how they’re teaching the students, what’s a one thing that you suggest that they try?

Jessica Boyer: I think the biggest thing is being open. Being open to pick one thing. So, don’t try and take everything at once, but pick one thing to really focus on. Again, I think my biggest …

After learning the four early numeracy concepts and just having my eyes open to that, that kind of propelled me into wanting to learn more. So, if there’s one thing, if you are open, I think watching those videos on the four concepts and then how they all build on top of each other.

Really understand whatever that one thing is that you want to focus on. And yours was the four early numeracy concepts. And in the show notes, we will link to that and to the Van de Walle book that you mentioned. So, we’ll make sure that we reference everything that Jessica has talked about today just so you can go find that out for yourself and see if that is the one thing that you might want to focus on.

So, thank you very much Jessica, for helping to share your story of how you’re making a change in your classroom. And I hope that this inspires those of you listening to try to make a change. One small change in how you’re building math minds. 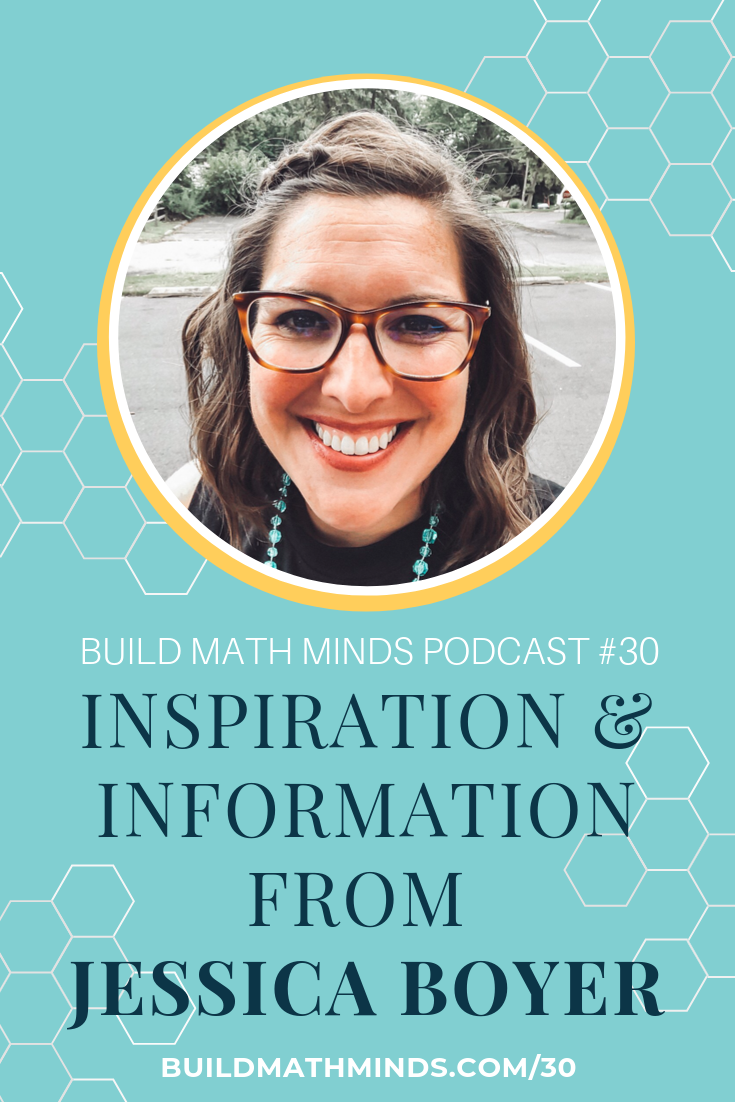